After stealing the show at Trooping the Colorthe Cambridge kids were back out in force on Saturday.

Prince George and Princess Charlotte made a surprise appearance on Saturday, joining their parents Prince William and Kate Middleton as the Duke and Duchess of Cambridge visited Wales for the Queen’s Platinum Jubilee.

Arriving at Cardiff Castle for the first engagement of the day the eight-year-old prince and seven-year-old princess dutifully shook hands as they were introduced to people.

READ MORE: William and Harry have ‘no plans’ to spend time together during Platinum Jubilee

They then joined their parents on a walkabout, chatting to those who had waited to see them and collected bouquets of flowers from well-wishers.

Prince George and Princess Charlotte, each holding their parents’ hand, watched a rehearsal for the concert.

William and Kate also spoke to crew members about the technical side of the production, such as lighting, sound and visual effects, before helping with some of the final preparations for the concert.

The concert at Cardiff Castle, hosted by Aled Jones and Shan Cothi, will feature live performances from some of Wales’ best known singers and entertainers, alongside choirs, bands and orchestras.

But it will all wrap up in time for revelers gathered to watch the Party at the Palace concert on the big screens set up on the Castle lawns.

Prince William will be racing back from Cardiff with the Duke of Cambridge set to make a speech in honor of his grandmother, the Queen, on stage during the Party at the Palace concert in London.

Prince Charles will also take to the stage outside Buckingham Palace to pay tribute to his mother.

The Cambridges’ trip to Wales coincides with the Earl and Countess of Wessex’s visit to Northern Ireland on Saturday and follows Princess Anne and Sir Tim Laurence’s visit to Scotland on Friday afternoon.

Little Prince Louis, 4, who stole the show with his facial expression at Trooping the Color did not make the trip to Wales with his older siblings.

The trio of Cambridge kids made their debut at Thursday’s military parade, riding in the carriage procession for the first time.

Watch the Queen’s Jubilee: Platinum Party at the Palace live on Sunday June 5 at 4.30am on Channel 9 and 9Now. Catch up for free on 9Now. 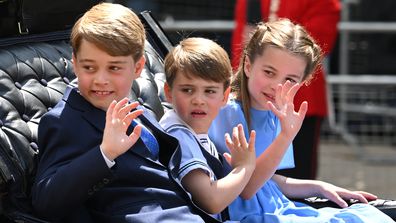 School holidays in Perth: The hottest events to entertain the kids this July

James Weir: Top Gun Maverick is just Bring It On for adult men