queen elizabeth has appeared on the balcony of Buckingham Palace during Trooping the Colour, marking the official start to her Platinum Jubilee.

The monarch, 96, used her walking stick as she made her way outside onto the balcony, wearing the same blue coat designed by Angela Kelly she was pictured in for her official Platinum Jubilee portrait taken at Windsor Castle.

Pinned the monarch’s coat is the Guards’ Badge.

She was joined by her cousin the Duke of Kent.

A short time later the Queen was joined with working members of her family for the famous flypast, a six-minute display of aircraft, now wearing her sunglasses.

Among those on the balcony with Her Majesty included the Prince of Wales and the Duchess of Cornwall, the Duke and Duchess of Cambridge and their three children Prince George, Princess Charlotte and Prince Louis, Princess Anne and her husband Sir Timothy Laurence and the Earl and Countess of Wessex and their children Lady Louise and Viscount Severn.

They stood to watch the six-minute fly-past of more than 70 aircraft, featuring Apache helicopters, Typhoons and The Red Arrows.

The Duke and Duchess of Sussex, who returned to the UK from the US were seen watching the Horse Guards Parade earlier in the event from the Major General’s Office.

The Horse Guards Parade was the first part of Trooping the Colour.

Prince William, in his role as Colonel of Irish Guards, was on horseback. This year, the Color of the 1st Battalion Irish Guards will be trooped. The Prince of Wales and the Princess Royal were also on horseback.

The three Cambridge children bowed their heads in respect as they passed the colour, squinting in the bright London sunshine as they rode along.

The Duchess of Cambridge is wearing diamond and sapphire earrings, believed to be from the collection of Diana, Princess of Wales, known as the Saudi Sapphire suite and a matching pendant.

Her white outfit is a re-wear from her wardrobe made by Alexander McQueen, her hat by British milliner Philip Treacy.

Thousands of people are lining the streets of The Mall in London leading to Buckingham Palace where the main event is taking place but all public vantage points are now full the Metropolitan Police has confirmed.

Other royals to watch from that vantage point will include the Queen’s other grandchildren Peter Phillips, Zara Tindall, Princess Eugenie and Princess Beatrice – and their spouses, along with any of their children old enough to watch from afar.

ULTIMATE GUIDE: What to expect from this weekend’s Platinum Jubilee celebrations

Also present will be the Duke of Kent, Princess Alexandra, Prince and Princess Michael of Kent, the Earl of Snowdon and his family, and Lady Sarah Chatto and her family. The Duke of York, who retired from public duties in November 2019, will not be there.

The Queen and her family will then watch a six-minute fly-past of more than 70 aircraft, featuring Apache helicopters, Typhoons and The Red Arrows.

Aircraft from the Royal Navy, the Army and Royal Air Force will fly over Buckingham Palace after Trooping the Colour.

The first to appear will be the Royal Navy Wildcat, Royal Navy Merlin and British Army Apache helicopters.

The Queen is marking 70 years on the throne, the first British sovereign to do so.

Her great-great grandmother Queen Victoria came close, ruling for close to 64 years. She celebrated her Diamond Jubilee in 1897 and in 2012 Queen Elizabeth did the same.

This year, on February 6, the Queen officially became Britain’s longest-serving monarch on the anniversary of her father’s death.

On April 21, she turned 96 but the sovereign’s birthday is celebrated in June due to the weather being more favorable in the UK.

The Queen’s Platinum Jubilee will coincide with her official birthday today as the royal family takes part in Trooping the Colour.

The show is the first in the four-day holiday weekend and will see members of the British royal family come together in celebration of their leader.

Prince Harry and Meghan returned to London from the US at the invitation of the monarch.

It will be the first time the Sussexes have reunited wit the wider royal family since their departed as senior working royals in 2020. 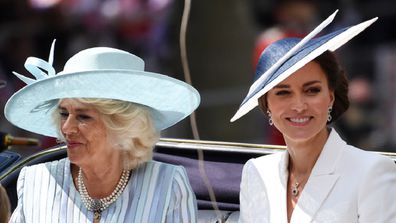 Jon Cryer was almost Chandler – plus TV secrets of Friends, Cheers, and more