The US economy shrank for a second consecutive quarter, meeting one of the common criteria for a technical recession and complicating the Federal Reserve’s push to stamp out soaring inflation with a string of aggressive rate rises.

Data published by the commerce department on Thursday showed gross domestic product fell 0.9 per cent on an annualized basis in the second quarter, or a 0.2 per cent fall from the previous quarter. This follows first-quarter GDP data showing the US economy shrank 1.6 per cent in the first three months of 2022.

Back-to-back quarterly contractions meet one definition of a recession, although the US relies on a determination by a group of researchers at the National Bureau of Economic Research who look at a broader range of factors.

The White House has maintained that the US economy is not at present in a recession, with Treasury secretary Janet Yellen saying earlier this week she that would “be amazed” if the NBER declared it was.

She underscored that message at a press conference on Thursday, emphasizing that the economy “remains resilient”.

“Most economists and most Americans have a similar definition of recession: substantial job losses and mass lay-offs, businesses shutting down, private-sector activity slowing considerably, family budgets under immense strain. In sum, a broad-based weakening of our economy,” she said. “That’s not what we’re seeing right now.”

But two consecutive quarters of negative growth will nonetheless heap further pressure on President Joe Biden, who is contending with low approval ratings and has repeatedly touted a strong economy as one of the big achievements of his administration.

Shortly after the data were published, Biden said: “It’s no surprise that the economy is slowing down as the Federal Reserve acts to bring down inflation.

“But even as we face historic global challenges, we are on the right path and we will come through this transition stronger and more secure. Our job market remains historically strong.”

In a press conference on Wednesday after the Fed raised interest rates by 0.75 percentage points for the second consecutive month, chair Jay Powell said he did not believe the US was in a recession. He pointed to strength in the economy, including in the labor market, but noted that growth would need to slow and the labor market must cool down in order to tame inflation.

The labor market has not yet shown significant signs of weakness, with the US adding jobs at a healthy pace, averaging about 380,000 a month over the past three months. The unemployment rate also remains historically low at 3.6 per cent, just shy of its pre-coronavirus pandemic level.

“Nobody would look at two quarters in the United States of 3.6 per cent unemployment and call that a recession,” said Claudia Sahm, founder of Sahm Consulting and a former Fed economist. “We’re not in a recession in the true sense of the word, which is a broad-based sustained contraction in economic activity.”

The fallout from the GDP data rippled through debt markets. The two-year Treasury yield, which moves with interest rate expectations, plunged, suggesting investors were betting the Fed might have to slow its pace of interest rate increases. The 10-year yield, which moves with growth and inflation expectations, fell to its lowest level since April.

Despite the drop in headline GDP, personal consumption, which offers insight into the health of the US consumer, grew 1 per cent in the second quarter, compared with growth of 1.8 per cent in the first three months of the year.

The biggest drag on second-quarter GDP was a drop in business inventories, which wiped 2 percentage points off the headline figure.

Some economists believe this was a lingering effect of last year’s pandemic economy when business inventories surged as shelves were restocked after Covid-19-related supply chain bottlenecks started to ease. But the slowdown also reflected the damping impact the Fed’s interest rate rises have had on business investment, economists said.

“The inventory data have been very volatile for the past two years. Inventory management has been very difficult, partly because of the supply chain problem and partly because demand for goods was red hot,” said Brian Smedley, an economist at Guggenheim Partners.

The hefty rate increases implemented by the central bank in recent months have begun to put the brakes on the economy, and market participants are watching closely to see if this rapid tightening will tip the US into an official recession. 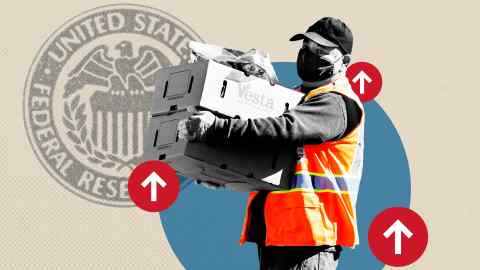 That has been evident in the housing market. The GDP data show residential investment fell 14 per cent in the second quarter, just as higher interest rates began pulling up mortgage rates. Further increases will pose additional challenges for the housing sector.

Economists said the data were unlikely to change the Fed’s calculus about the path forward for policy.

“I don’t think the GDP print would or should influence the Fed,” said AllianceBernstein economist Eric Winograd.

Over 30,000 Tech Employees Lost Their Jobs

US considers crackdown on memory chip makers in China