In a study published in the journal Materials Today Communications, analysis was conducted on shape memory polymeric composites (SMPCs) made from industrial substances previously utilized in aerospace. The findings enabled the identification of recovering processes at the microscopic level crucial for shape memory capabilities at the macroscopic level.

Shape-Memory Polymers – A Mainstay in the Future of Several Industries

Shape memory polymeric composites (SMPCs) belong to a class of smart material architectures that can distort and restore their original shape when stimulated.

In thermally stimulated architectures, the glass transition temperature (Tg) may be utilized to tune the fixing phase and the original shape’s recovering qualities. Interest in these smart materials is high in various industries, including biomedical and aeronautical fields, where the use of actuation is critical.

Depending on the function needed, a suitable polymeric framework might be used. Generally, thermosetting resins have superior shape memory characteristics compared to thermoplastics, and epoxy resins often give the highest performance.

Epoxies have outstanding thermal and mechanical qualities and are widely employed in all production techniques utilized in high-impact sectors such as aerospace and automotive fields.

Main Objective of the Study

The use of thermo-mechanical cycling to measure the SM qualities is a common approach for evaluating the shape memory behavior of the SMP.

The shape memory behavior and interactions of the distinct layers at the nanometric scale have yet to be studied. This research aims to thoroughly analyze these smart materials on a microscopic and a macroscopic level, with a special emphasis on the resultant mesostructures. 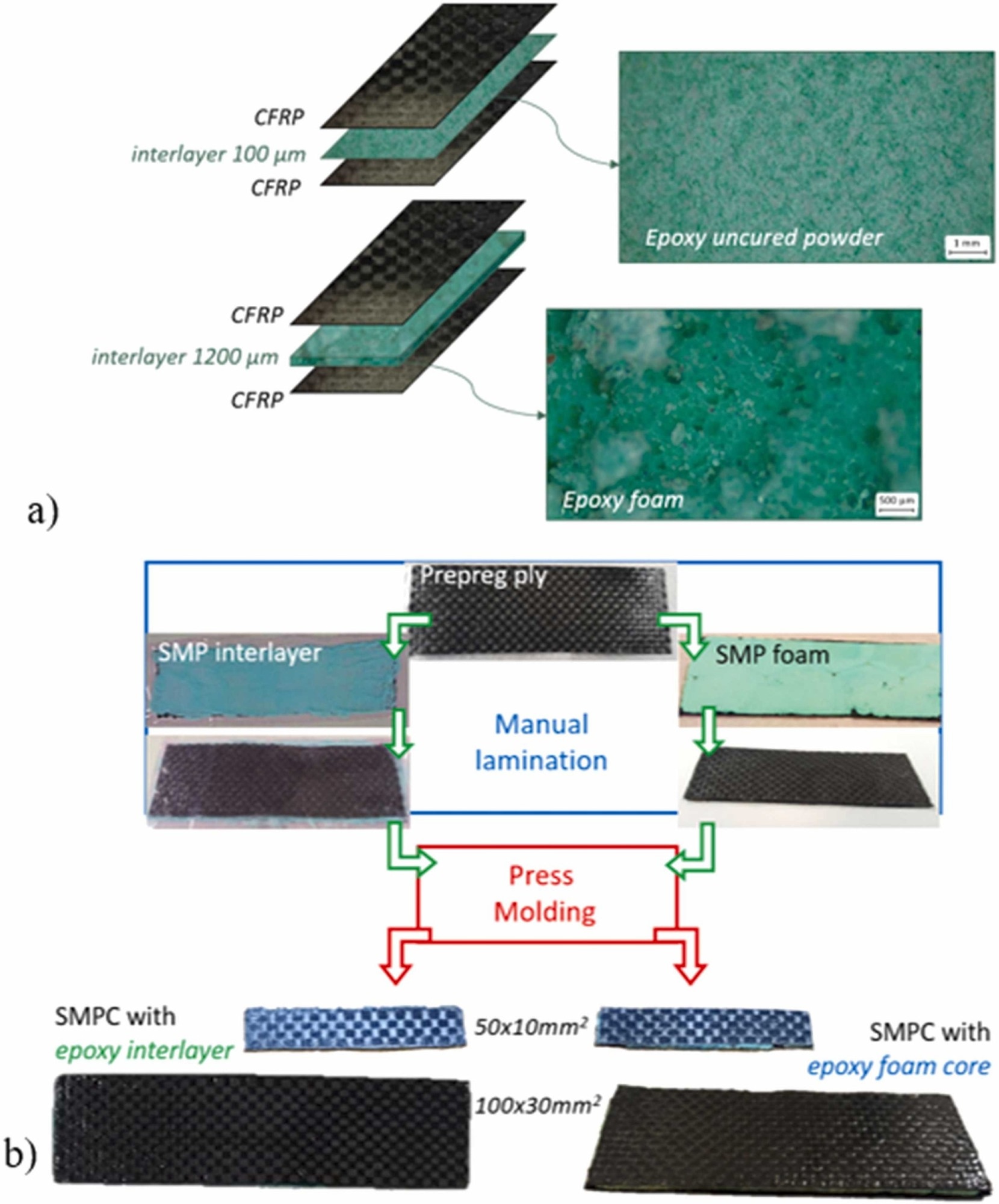 a) Schematic of SMPC structures and b) procedure for SMPC samples manufacturing. © Bellisario, D., et al (2022)

The two systems were built to test the suitability of an aerospace molding method, such as compressive molding, in producing smart architectures for aircraft. This was a significant accomplishment for the research since most suggested novel shape memory polymeric composite materials in the existing literature could not be classified as aerospace-grade materials. 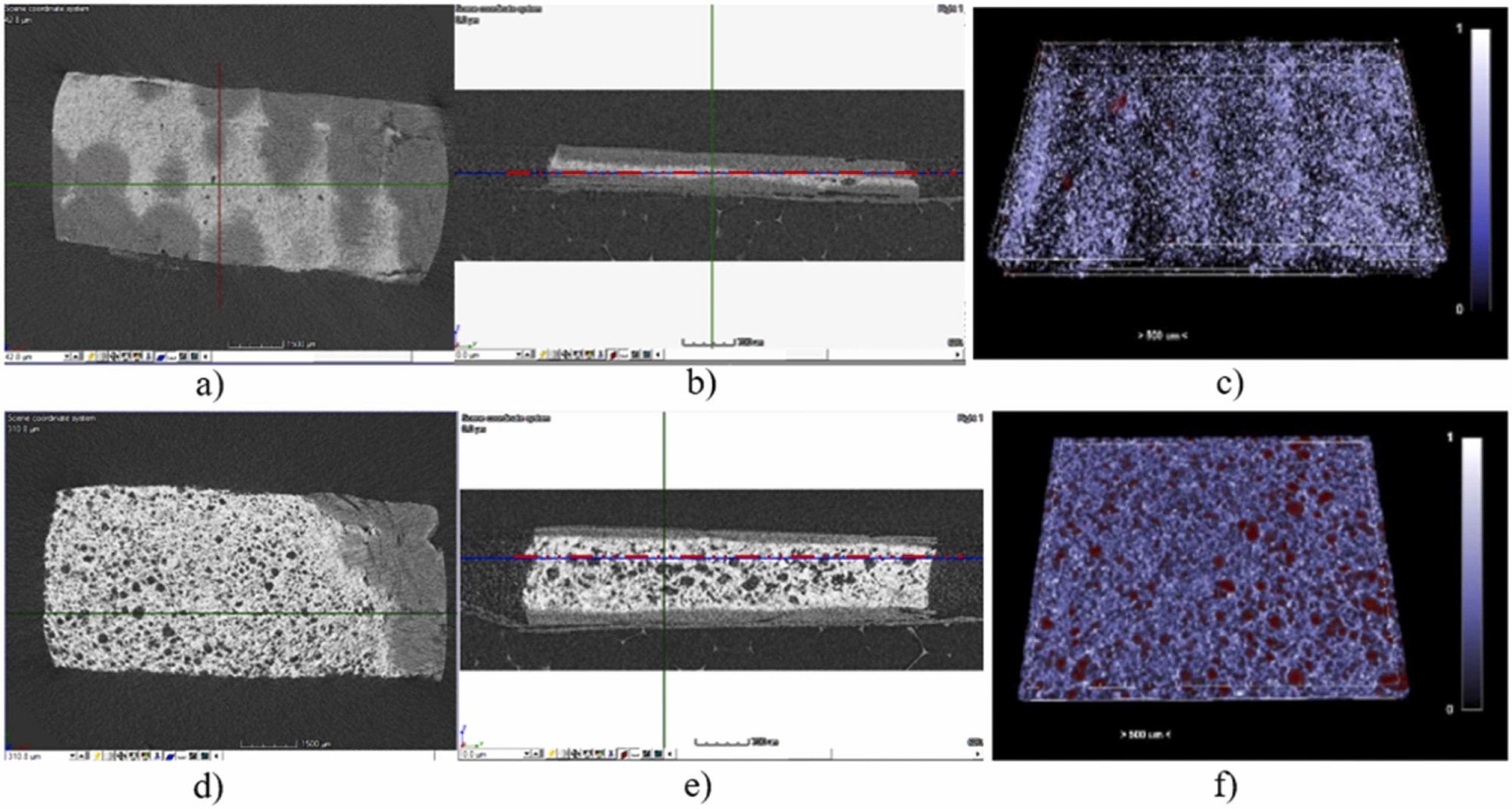 Key Findings of the Study

MicroCT and SEM imaging demonstrated strong bonding among the carbon fiber reinforced prepreg (CFRP) layer and the epoxy interlayer, either in the form of a thin foam layer or a thin film. The homogeneity of the thin shape memory polymer interlayer created during compound lamination was emphasized by SEM imaging, with a very small level of porosity in CFRP layer shown by MicroCT assessment.

DMA studies revealed that shape memory interlayers influenced the transitional region, which narrows further when shape-memory resin is utilized. Nano-instrumented indentations and micro-indentations were used to analyze form restoration behavior at the microscale and nanoscale.

This was the first time the nano-instrumented approach was applied to this kind of shape memory polymeric composites, allowing the temperature for SM response to be calculated across a small region for both SMPC forms.

Disclaimer: The views expressed here are those of the author expressed in their private capacity and do not necessarily represent the views of AZoM.com Limited T/A AZoNetwork the owner and operator of this website. This disclaimer forms part of the Terms and conditions of use of this website.

Adobe is testing a free Photoshop version in Canada ⁠— will it come to the US, too?

Converting an iPhone into webcam for your MacBook: Here’s how it will work

Apple finally lets you use your iPad as a real computer