Not many people can say one of their most memorable life experiences took place when they were a newborn. But for 18-year-old Zara Harrington, it’s her fascinating reality.

The Melbourne teen, who is just finishing up her final year of schooling, won a coveted role on Australian television at three months old.

In her first-ever media interview, Harrington tells 9Honey she is enormously proud of her small but memorable part in the beloved noughties series.

“I really had no choice, I was kind of just placed there,” Harrington laughs, adding she was “so glad” it happened.

“Years down the track, my parents told me and that’s how I found out all about it.”

Harrington played Epponnee-Rae from ages three to six months, before she was replaced by an older actress for season four of Kath & Kim.

It was a lucky twist of fate that she would be used to portray the Craig family’s adorable bub.

Her mum took her to a baby shower of a friend, who just so happened to be the auntie of the first Epponnee-Rae, who was introduced to fans in season two.

The producers were looking for another newborn to portray Kim and Craig’s daughter – and that’s where Harrington came in.

“They said to my mum they were looking for a baby who could be in season three as [the other baby] had grown too much at that stage,” she explains.

“Luckily, I met the criteria they were looking for – the right eye colour, dark hair and olive skin. So my mum had a little photoshoot and sent them to Gina [Riley] and Jane [Turner]and they were impressed.”

READ MORE: Nostalgia trip: What happened to the faces and fads we grew up with?

She adds: “From that they decided quite quickly that I would be the perfect baby to play Epponnee-Rae.”

Harrington and her mum spent three months on-set at the Day-Knight household in the Melbourne suburb of Patterson Lakes.

The teenager was the adorable baby in a pink jumpsuit in the iconic scene where Brett carries Epponnee-Rae during a shift at the fictional Computa City.

Harrington says she watches her scenes with a mixture of perplexity and pride.

“Years down the track, my parents told me and that’s how I found out all about it.”

As she was a newborn, it’s hard for her to remember being on-set with the hilarious cast of comedians. But sometimes, when she re-watches the show, it sparks a deep-seated memory.

“It kind of brings back some memories. Not everything, but I do remember doing Christmas scenes and after seeing photos, I can remember it,” Harrington says.

“It’s really special, not a lot of people have something like that and I think I am quite lucky.”

Harrington doesn’t want to shy away from talking about her connection to the much-adored sitcom. She even posted a TikTok video earlier in 2020 which went viral this year, joking about being “recognized” on the street for her role as Epponnee-Rae.

READ MORE: Love story: Sarah put on ad on Gumtree and stumbled across the love of her life

The ensuing media articles and messages from strangers spooked Harrington, who quickly deleted the clip and decided against posting anymore.

“I’ve never really been confident about telling people because I’m nervous about the reaction,” Harrington admits.

But as Harrington – who is wise beyond her years – tells 9Honey, there’s nothing to be embarrassed about. “Why should I hide it?” she asks.

“I’ll get two reactions. One is, ‘Oh my god, that’s incredible’,” she adds. “And the other is a bit of backlash, like, ‘You were just a baby, no-one recognizes you’.”

Of course, Harrington doesn’t expect anyone to recognize her from her time on the screen. But she loves having a laugh at herself, which is what Kath & Kim was all about.

READ MORE: Students in New Zealand want mandatory consent education, but say those in power aren’t listening to their voices

Season three of Kath & Kim ran in late 2004, so it’s been nearly 18 years since Harrington graced Australia with her screen presence.

She didn’t pursue acting, instead did a little modeling when she was younger.

Her dream now, however, is working in the medical field. And Harrington has a very surprising fun fact to tell her new university mates when it’s time to introduce herself in class.

“When I watch the show, it kind of brings back some memories.”

“I have friends who tell people when we’re out, they’ll say, ‘Zara was the baby in Kath & Kim’,” she says.

“I never try to brag or impress people, but it is funny to talk about it. I love answering questions and seeing their intrigue and wonder about how on earth I managed to land that job.”

When asked if she’d ever take part in a reboot or reunite with all the Epponnee-Rae actors over the years (including Kylie Minogue), the answer is a resounding yes.

“I’d be so eager to do a reboot of the show, I think that would be really cool,” she says.

“There’s a whole group of us now, who played her. People sometimes ask me where Epponnee-Rae would have ended up, and I say, well she was Kylie Minogue as an adult!”

And now Kath & Kim has landed on streaming services, Harrington loves the idea of ​​millions watching her scenes from 2004.

It’s a bizarre but wonderful thought, she happily muses. The young student is glad to have played a small part in a show that has entertained so many generations.

“I think the way Kath & Kim approached comedy, furiously poking fun at themselves, it makes them appeal to all different ages and types of people,” Harrington says.

“It’s a remarkable piece of satire, that’s why it has this lasting impact.” 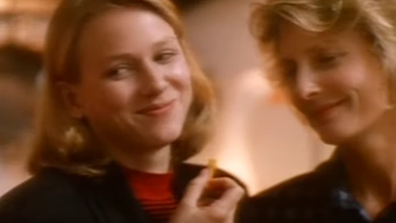 The Naomi Watts role that lives on in Aussie hearts

Elon Musk’s transgender daughter files for name change, no longer wants to be related to him