Bond futures are fully priced for another half-point lift to the RBA’s 0.85 per cent cash rate in July and a 12 per cent chance of a 0.75 percentage point increase. Markets are pricing in a cash rate of 1.9 per cent for August.

KPMG chief economist Brendan Rynne said the underlying strength of the economy was dragging additional workers into the labor market, with the participation rate increasing by 0.3 percentage points to a record 66.7 per cent in May.

The increase in participation meant the unemployment rate held steady at a 48-year low of 3.9 per cent instead of falling further.

“The key question now is whether the labor market strength is going to be maintained in this upcoming period of higher interest rates, higher labor costs and higher inflation,” Dr Rynne said.

The Reserve Bank expects the unemployment rate to fall to 3.7 per cent by the end of the year.

JP Morgan economist Tom Kennedy said participation gains were particularly strong among young workers, with the share of people aged 15 to 24 either in a job or seeking employment reaching a multi-decade high of 71.9 per cent.

The participation rate for women increased to 62.3 per cent in May, just shy of recent record highs.

“Average employment growth over the past three months (30,000) continues to be stronger than the pre-pandemic trend of around 20,000 people per month,” Mr Jarvis said.

“In addition to the continuing trend of increasing employment, we have continued to see relatively stronger growth in hours worked. This is something we also saw this time last year, before the delta outbreak.”

“We continue to see the peak in the cash rate being around 2.5 per cent, but it could come earlier given the RBA’s shift towards a more aggressive approach,” Mr Oliver said.

“There is nothing in this report to dissuade the RBA from raising rates by another 50 basis points in July and August, as is NAB’s view, as it continues to reveal a tight labor market and interest rates remain well below the RBA’s nominated 2.5 per cent neutral rate,” he said.

RBC Capital Markets revised its rates forecast after the release of the jobs numbers to include three 50 basis point rate rises in July, August and September, at which point the cash rate target would be 2.35 per cent.

“Risks remain skewed to the upside, and we suspect that RBA itself currently thinks it will need to hike into unequivocally restrictive territory, 3 to 4 per cent cash [rate]to restrain inflation.

“Our thesis, however, is that a deteriorating consumer will prevent the RBA hiking any further in the back end of 2022,” RBC analysts said.

Economists say the Fair Work Commission’s minimum wage ruling on Wednesday could quickly flow on to the bulk of the workforce on enterprise agreements due to more deals up for negotiation, putting additional pressure on the RBA to raise rates.

Morgan Stanley economist Chris Read said the decision to introduce 4.6 per cent to 5.2 per cent increases for minimum wages would have a benchmark effect for broader wage expectations and negotiations.

“There are about 40 per cent of workers on agreements and these agreements lock in wage growth rates for several years, which would usually imply a relatively gradual rate of aggregate wage growth change,” Mr Read said.

“However, data suggest a greater degree of stale currently being renegotiated, which could mean a faster pass-through (and lock-in agreements) of higher wage outcomes.”

Citing persistent wage growth as an “important driver” of its forecasts, Morgan Stanley now expects inflation to reach 7.4 per cent by the end of the year and for the RBA to deliver 50 basis point rate hikes in both July and August.

In a further sign of strength, the underemployment rate fell by 0.4 percentage points to 5.7 per cent. It means the underutilization rate, which includes both unemployed and underemployed people, fell to 9.6 per cent, its lowest level since April 1982.

Commonwealth Bank economist Belinda Allen said the fall in underemployment was the “standout feature” of the May numbers.

“The fall has been remarkable and reinforces both the demand for labor but also the labor supply constraints in Australia since the pandemic,” Ms Allen said. 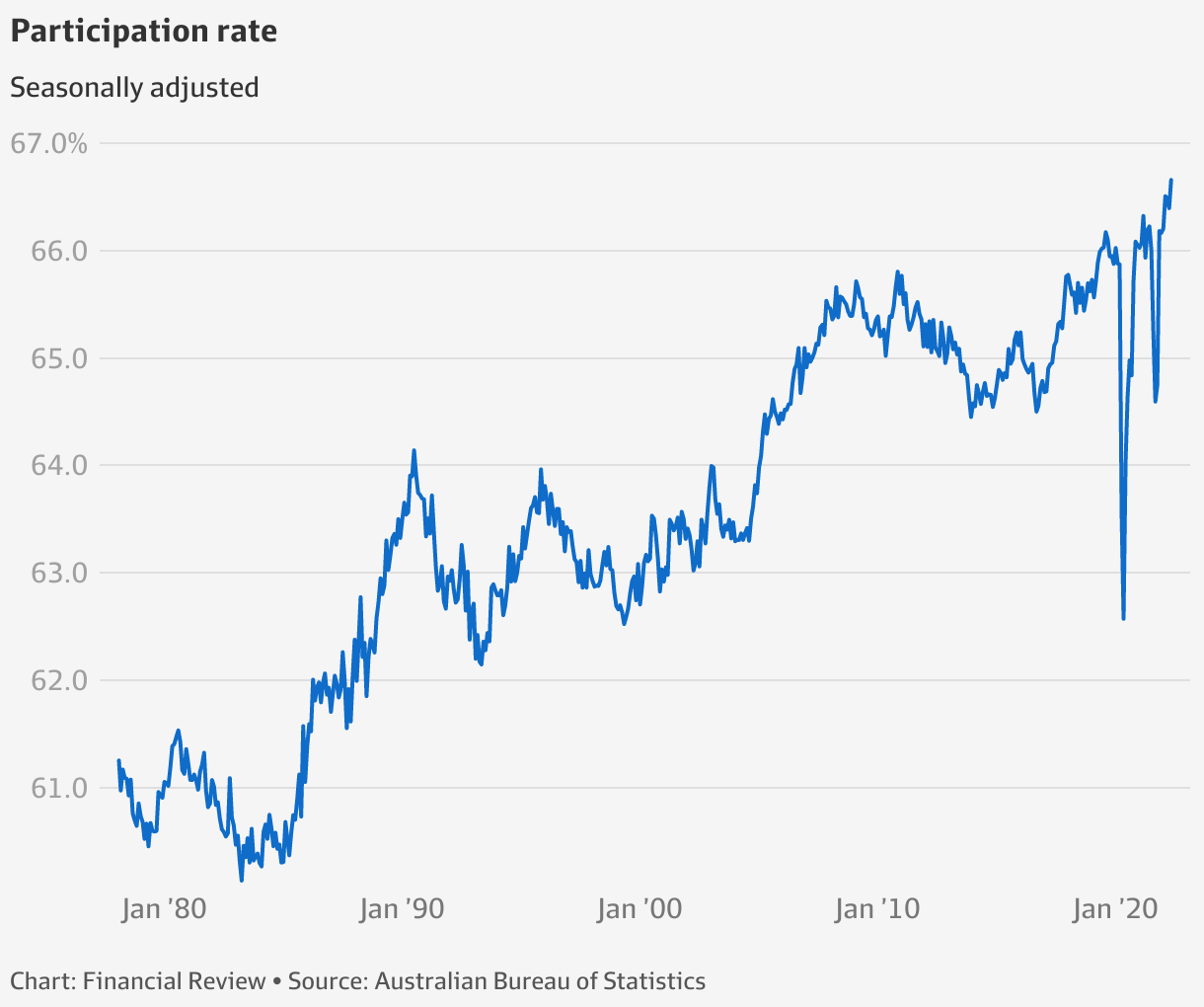 “Workers remain upbeat about the jobs outlook, with the share of workers expecting to change jobs/seek other employment within the next year being around its highest level since 2008,” Ms Black and Ms Chow wrote.

The strong increase in employment comes amid ongoing growth in job vacancies, as businesses struggle to find enough workers to meet a boom in domestic demand.

There were a record 423,500 job vacancies in February, equating to 3 per cent of the labor force.

Spending appears to have held up in May, despite ongoing declines in consumer confidence as households grapple with falling real wages and higher interest rates.

Data from Mastercard, compiled for the Australian Retailers Association, showed retail sales were 7.8 per cent higher over the year to May.

As cost of living bites, more Australians are seeking second-hand bargains — many of them online